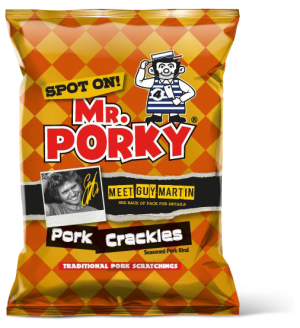 Mr Porky has teamed up with Guy Martin to offer fans a ‘once-in-a-lifetime’ chance to meet Guy at an exclusive event.

Emily Hill, from Mr Porky’s explains: “Mr Porky has been involved with Guy for the last year or so sponsoring his visor. It’s a great association for us; Guy only works with brands he likes. We’ve been batting around ideas for a while of how to do more with one another and in the end we’re doing a couple of different things.

“First and foremost we’re offering people the opportunity to not just see Guy, but really meet him. Have a cuppa, a pork scratching and a chat at one of three special events we’ll be holding for competition winners.”

Guy Martin explains: “I’m not good with really big crowds but a small group of like-minded folk is great and I’m looking forward to meeting people who are into my sort of stuff – two wheels, four wheels, engines, nuclear fusion, Ghenghis Kahn and pork scratchings, of course!

“We were brought up on ‘em in our house. They go with a cuppa or a pint and I love them as they are like me – a bit different, a bit oddball and a bit off-the-wall but they taste spot on. They are proper food not like lentil and basil soup, just honest and, like me I suppose, they are what they are.

“I reckon I had my first pork scratching at about age five when me Dad brought some home from work on the trucks, I’ve never looked back since. Mum fed us them as kids and we still all have a bag when we get together, I’m not joking!
“Pork scratchings are a great anytime, endurance food. I ate ‘em during the Strathpuffer extreme mountain bike event, which was a 24-hour challenge in the cold, dark forests of Scotland. They definitely helped me to keep going in one of the hardest mountain bike races in the world. Loads of the race boys swear by ‘em”

Emily Hill, from Mr Porky’s added: “Guy Martin is a real character; we’re delighted to have such a great partnership with him. Guy’s straight talking nature is the same as Mr Porky. We make great tasting snacks. No porkies.
“We wish everyone who enters the competition best of luck. Limited edition packaging is available in all good pork outlets.”

Guy added: “I am really looking forward to the event and getting some interesting questions, I tell you what boy, they’ll have a job making me blush. To be honest, I like to be challenged question wise – is that fighting talk?”

Mr Porky is the UK’s largest pork scratchings brand, selling nearly 20 million packs per year. It is owned by Tayto Group Ltd, the biggest British-owned crisp and snack manufacturer, which produces five million bags a day across its five sites. The company remains family-owned and has a portfolio of some of the UK’s most iconic snack brands, including Mr Porky, Golden Wonder, Real Crisps, Ringos and Tayto.