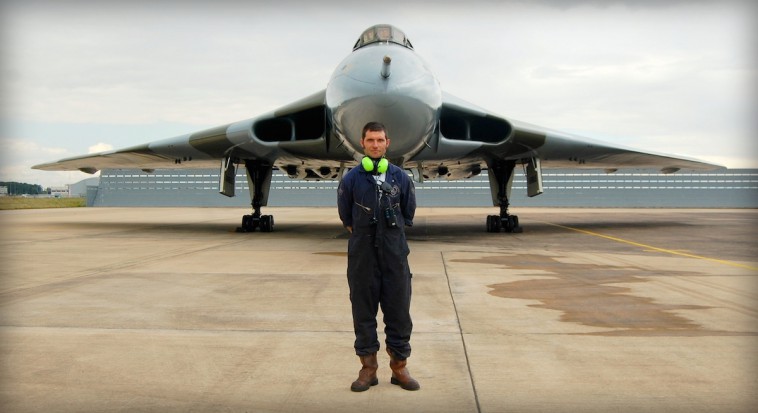 “The Vulcan is being parked up for good and I was asked to do a programme about the plane, its history and the final flight. The Vulcan first flew in 1952 and it’ll never fly again. The reason is, it needs a load of people from BAE systems, Marhsall Aerospace and Rolls-Royce to sign off the plane to be safe to fly, and all the folk with the right sort of 1950s skills to do that are either retiring or dying off.

“It would be so difficult to do again because the Vulcan is classified as a complex aircraft by the CAA – the Civil Aviation Authority. Spitfires and Lancasters and all that are classed as simple aircraft.

“Before the one the programme concentrates on was made air-worthy again, the CAA said that plane will never fly again, we don’t even have a category for it, but Dr Robert Pleming, the main man behind getting it back in the air, said ‘Well, what if I do this?’ And the authority said, ‘Well yes.’ And he did that for every problem. It cost £7 million, raised through the charity, Vulcan To The Sky Trust, to get the Vulcan back in the air and it’ll never fly again.

“It has 14 miles of wiring and 100,000 components. There are no mechanical links to anything. With a Lancaster or a Spitfire you can see that bit moves that bit, but the Vulcan is all run by mechanical computers: gears and cogs that flick this relay that energises that relay. It is massively complex.

“I was having a craic with the pilots, but as soon as it came to the pre-flight checks they turned into robots. They aren’t nervous going up in it because they spend an hour doing pre-flight checks, every button is checked.

“The majority of Vulcans were based in Coningsby, Scampton and Waddington, all Lincolnshire air bases, but that link to Lincolnshire doesn’t make me like it more, even though this county is the centre of the universe. It just made sense to base bombers here because of it’s strategic location during World War II and the Cold War. The attraction is just that the Vulcan is a fascinating plane with a lot of history.

“There was a week of celebration of the plane, just before it was parked up for good and during that week I went up in The Blades’ stunt plane and flew so close to the Vulcan that I felt I could have reached out and touched its wing. It was another money couldn’t buy it experience that i’ve had through the TV job.