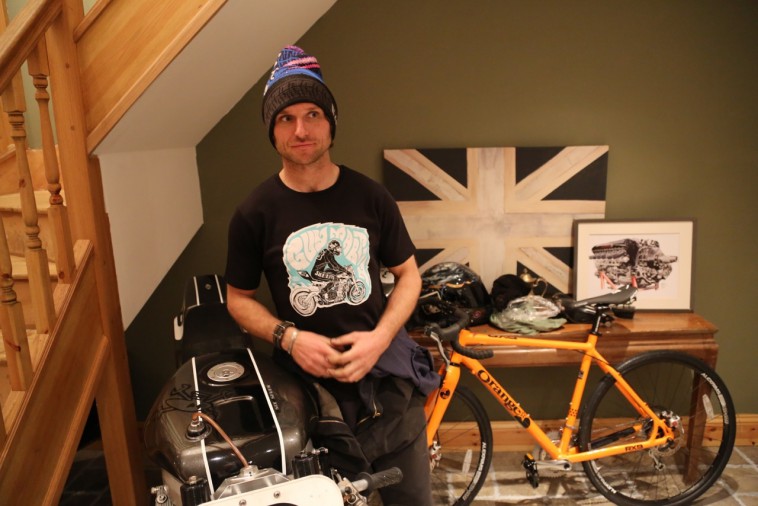 I went to see Sleaford Mods on the first and last night of their tour. I love my bands, but I’ve never done that before.

They’re two normal blokes. Normal blokes you wouldn’t want to fall out with. They’re not mods. I don’t know how you’d describe their music. Jason Williamson is the front man and Andrew Fearn is the DJ, but he hardly does anything on stage, just presses a button on a computer every now and then and drinks beer. But they’re good.

They’re in their mid-40s, in a pair of jeans and a T-shirt, no boy band hair-dos. There’s no stage show, just Jason screaming down a microphone. I wouldn’t say it was hip-hop or rap, but it might be a bit of both those things. It’s a bit ska too, but electronic. It’s angry, whatever it is.

What got me into them was listening to a right rare mix of music on my iPod on the way back from a mountain bike race in Austria. There was a van full of us: Jason, Sam, Lee and Tim all in the Trannie. We had to drive through the night to get the ferry. The new Prodigy album came on, and Lee said, ‘That’s the fella from Sleaford Mods doing the vocals on that. They’re doing a tour.’ So we went.

The lyrics aren’t taking the piss out of the working class, because he is working class, but he’s observing all the shit we do. He’s not looking at life through Orwell’s eyes, but what Sleaford Mods talk about proves Orwell was right. The working classes are getting shit on by the establishment. He doesn’t sing, he shouts about it. He also rips into Johnny Borrell from Razorlight and takes the piss out of Radio 6 DJ Lauren Laverne, even though Radio 6 play them more than any other radio station. And he talks about a bloke bowling down the street with a Maharishi shoulder bag, looking like he owns the path.

I’ve listened to the album 20 times, but every time I play it I pick out the odd phrase that I think, Ah, I see what you’re saying now. He’s got summat to say, but you’d have to listen to it yourself to get the gist.

I went to the first night of the tour, at the Ritz in Manchester, with Sharon, Jason and his missus, and Lee. I couldn’t get in the mosh-pit at the first gig. I tried, but it wasn’t long after the Ulster accident, so I thought twice about it. I felt a bit out of place stood on the edge.

Lee said the last show was at Nottingham, the band’s hometown, so we went to that too.

I was stood right at the front and one of the bouncers, who was a Hell’s Angel, nodded to me and said, ‘Alright? You know Ken Fox, don’t you?’ I said, Yeah, and he let me stand in the photographer’s bit between the stage and the moshpit. Then I was in the moshpit for 20 minutes. It was a good night.

I went to see another band, last month, The Picturebooks, a German band in Grimsby too. It was at a little club called Yardbirds, a place I’ve wanted to go to for a long time. It’s run by the local bike club, The Warlocks.

The Picturebooks (https://www.facebook.com/ThePicturebooks/) are another band of just two blokes, but they’re very different to Sleaford Mods. The have big beards, long hair, dress all in black. One is a singer and guitarist, the other is on the drums. They play heavy blues. And the drummer really means it.

It was on a Sunday night and there weren’t more than 50 people there, but it didn’t stop the band going for it. They were bloody good.

Give them both a listen.