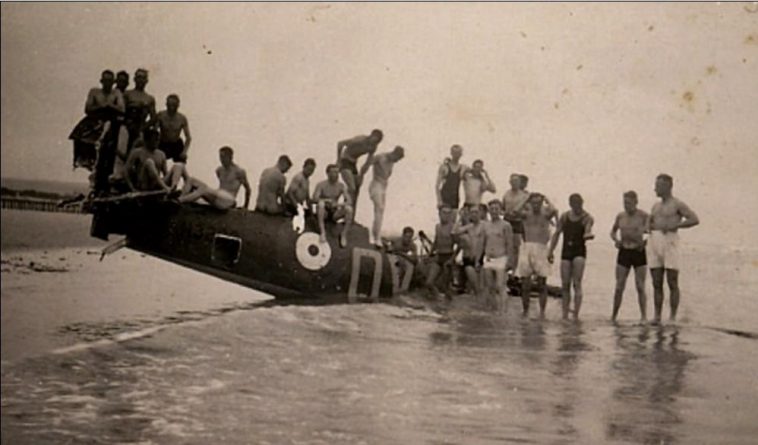 Guy’s new TV programme is a documentary about the re-building of N3200, a WW2 Spitfire. Read all about it here.

It’s breakfast time on Sunday, May 26, 1940
In Northern France the British forces are in full retreat, backed onto the French coast at Dunkirk and facing complete obliteration.

Prime Minister Winston Churchill has been in power for only a fortnight….

…but in a few hours he will order the launch of Operation Dynamo – the biggest military evacuation in our history.

Until then it’s the job of the RAF to fend off the German Luftwaffe from pounding the retreating troops.

Heading one band of Spitfires is the leader of 19 Squadron at RAF Duxford – 30 year old Geoffrey Stephenson – one of the most highly regarded pilots in the RAF.

Horribly outnumbered, his Squadron still claim a number of German fighters before he is shot down, managing to crash land on a beach near Calais.

His uniform in tatters from boiling water and glycol, he manages to escape and begin a long walk to Brussels, where he hopes to find the US Embassy and a way home. His untold story is straight out of Boys’ Own fiction, involving daring escapes, Colditz and the Queen.

His Mk I Spitfire becomes a beach toy for the Germans and local souvenir hunters as it slowly sinks into the sand – seemingly lost for ever.

Fast forward to the mid-1980s and as the sands shift in northern France the tail of the plane suddenly re-appears. The wreck is recovered and sits for more than 25 years rotting in a remote Normandy museum.

Purchased by American enthusiasts, it is finally returned home to Duxford and the experts of the Aircraft Restoration Company, who plan to re-build N3200 to its former glory.

Joining the team will be Channel 4 presenter and professional daredevil Guy Martin, a man so passionate about the Spitfire that he has his own working Merlin engine in an outbuilding on his farm.

Working from original blueprints and re-built with the same forensic detail as they were back in the thirties, Guy will learn not only how the famous planes were constructed, but also about the Spitfire factories, the ground crews, the armoury and, of course, the pilots, with contributions from surviving members of all those teams.

Two and half years in the making – this is the astonishing story of the meticulous re-building of N3200, its extraordinary history, the bravery and courage of the men and women who kept our Spitfires in the air and the apparently lost story of its pilot.

Produced by North One Television for Channel 4