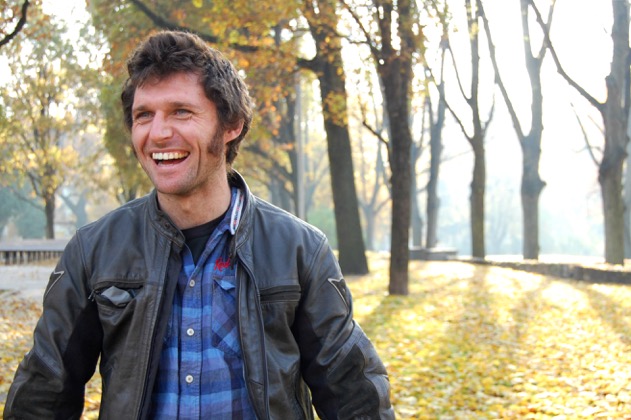 After the India programmes, that were on the telly earlier this year, the TV bods asked where else I’d like to go a do a travel programme. I’m quite happy in North Lincolnshire, and though I like seeing other places, I have to have reasons to go there. I’ve always wanted to go to Latvia, because my Granddad was from there. Voldemars Kidals is the man who told me, When You Dead, You Dead, that ended up being the name of my book.

The programme was originally going to be me sussing out what Latvia was about, but it turns out there’s an interesting story on my granddad, that we never knew. We knew he was a prisoner of war, but we found out more. He only died ten years ago, but there was loads of stuff he hadn’t even told his own son and daughter.

While I was out there I was looking into the family history, but also travelling around Latvia and meeting the locals, seeing them going about their daily business. It’s very like Lincolnshire. It’s only been out of Soviet control since 1988. Latvia that is, not Lincolnshire.

My mum and Granddad went over there in 1972 and you couldn’t say anything, because walls had ears back then and I like hearing all about stuff like that.

I saw where my granddad grew up and I could see why he settled where he did, near Caistor, where me and most of my family still live.

There are really only two major cities in Latvia, one being the capital, Riga, but the most interesting place we went was Liepaja, on the south-west coast. There are dirt roads between the towns and cities.

It was such an interesting place, and while the country isn’t all anti-Russian, most of it is. There’s still a lot of Russians there.

Blog brought to you by guymartinproper.com